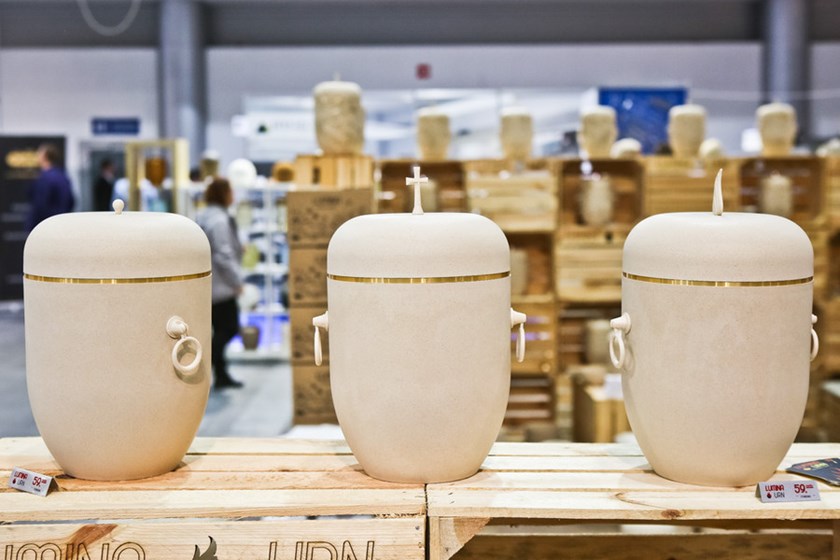 This year’s exposition of funeral fair MEMENTO Poznań included a wide variety of new products necessary for running a funeral parlour, crematory or managing cemeteries. The visitors had an opportunity to see among others: exclusive hearses, coffins, modern urns, tombstones, funeral clothing as well as cosmetics and different types of accessories.

The fair was also the place of granting the prestigious award – Acanthus Aureus. Traditionally, the award is granted to exhibitors who achieve best results in combining the vision of their stand with the marketing strategy of their company. Among the awarded were such companies as MOTIS Tadeusz Moczarski Przedsiębiorstwo Handlowo-Usługowe and MASTABA (Tesson Danuta Sikorska).

International character of the event

This year’s, 9th, edition of the funeral fair MEMENTO Poznań had a unique, international character. The circle of exhibitors included many foreign companies. At MEMENTO Poznań 2018 their debuts had such international companies as Memory Crystal, Limbo, Sortem, Grabkult, Artonis and Art Funeral. Thanks to this, visitors of the fair had an opportunity to see among others top-quality cremation urns, including brass urns handmade in India, which stand out with their patterns and high durability, or Italian inlaid urns in sophisticated shapes, decorated with symbols and colours allowing to commemorate the deceased person in an absolutely unique way.

Funeral fair MEMENTO Poznań provided its visitors with an opportunity to see new products offered by the Polish manufacturers and distributors of funeral services. For instance, at the stand of company Prima Tech one could see innovative models of such products as outdoor scissor carts, transporting stretchers with covers, tables for embalming bodies or catafalque.

During the fair some of the exhibitors also received MEMENTO awards, which are granted by the Polish Funeral Association. Traditionally, companies from the funeral industry were awarded in four categories. In category Pattern the award was granted to company MOTIS Tadeusz Moczarski Przedsiębiorstwo Handlowo-Usługowe for Lumina urns, in category Quality the award went to company MASTABA, in category New Product however, the award was given toc company Actam Communications for the first publication on the market entitled “Where are you now?” dedicated to children’s mourning. Wojciech Krawczyk’s special award received company PLASTMET, for its entire operations.

Expert knowledge for the professionals

MEMENTO fair in not just the exposition, but also the opportunity to develop one’s competences in selected areas. This year, programme of events included the scientific conference “Death, dying, remains and disposal of a body – contemporary narrations and practices”. The event was organized by the Polish Funeral Association under the auspices of the Institute of Philosophy and Sociology of the Polish Academy of Sciences. During the conference were raised issues connected among others with naturalisation of a dead body in contemporary arts or places of (non) commemoration of the victims of genocide in Indonesia in the years 1965-66.

Programme of the events was completed by presentations held at stands of the exhibitors of  MEMENTO Poznań fair. The visitors had among others an opportunity to watch presentations of funeral e-notifications (company eKlepsydra), learn about the possibilities to conduct a secular funeral ceremony (Master of Ceremony), study the details of GDPR in funeral parlours (Funeral Finance) or digital transformation of the funeral industry. The exhibitors also prepared presentation using spray devices for painting coffins (Unison). The fair also constituted a chance for professional visitors to introduce changes in their systems for servicing funeral companies and crematories, for which the could get inspired by company Tusoft which presented the software Funeral System.

Just like last year, during MEMENTO Poznań was held the premiere exhibition of calendar  LINDNER 2019.

As always, at the same time at premises of Poznań International Fair were held the complementary events: STONE industry fair and GLASS industry fair

Next edition of the funeral fair MEMENTO Poznań will be held in November 2020.

The new edition of OMEGA magazine is out. Read as you like!

New issue of OMEGA magazine, read on paper and online